How To Play Death Guard in Warhammer 40k 9th Edition. 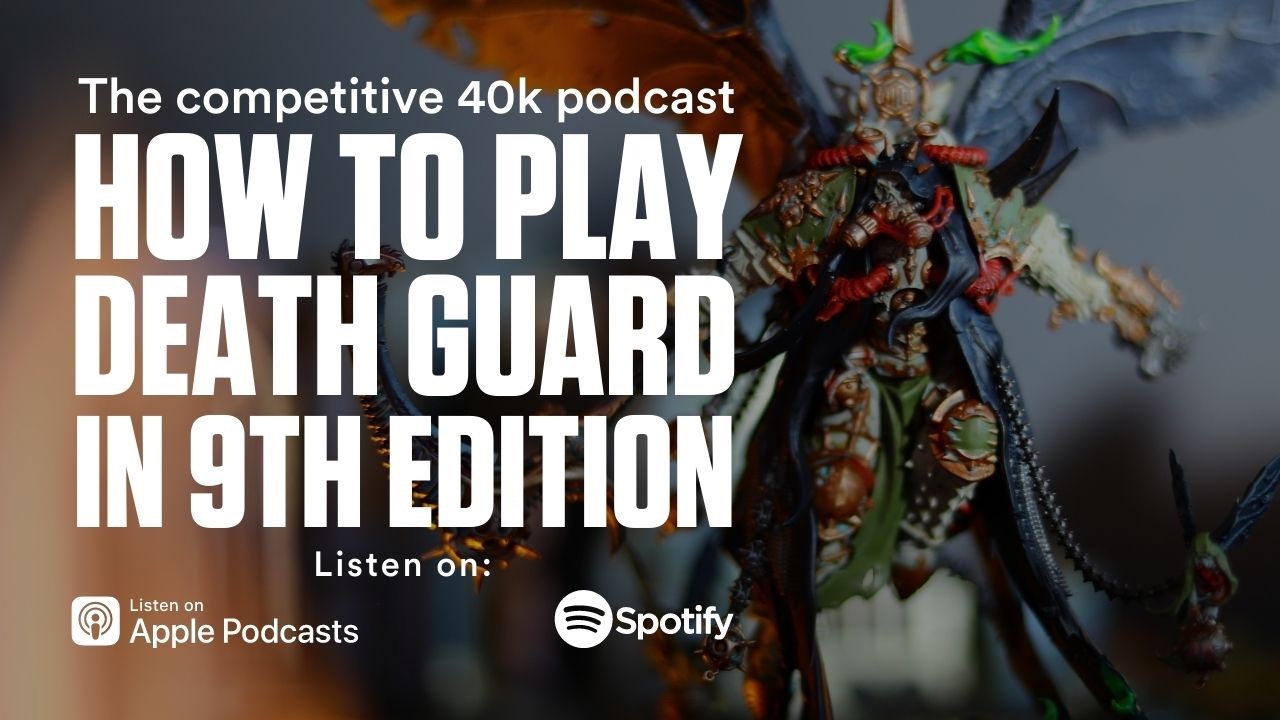 Want to know everything there is to know about the new Warhammer 40k Death Guard 9th edition codex?

If you are a Death Guard player, looking to play Death Guard then this two part show will help you understand the top tactics, combos and abilities in the new codex along with how these have application on the table.

If you are worried about the Death Guard and how to beat them, this episode will help you know everything there is to know about how they can catch you out at the table.

Top Vanguard Tactics Academy Student Max Gwiss, takes us through top builds, unit combinations and how to build a solid game plan for the Death Guard.

Special thanks to Jack Downing and Max Gwiss for their expert input on this episode.

Great Book, lots of interesting choices and options in terms of army build and play style.

I like the theme coming through the 9th edition book where ‘obvious’ power is being removed.

What the appeal with Death Guard?

Like slow and tough chaos space marines - this is the place for you.

What you will need to play Death Guard

Why play the Death Guard

What is the play style of the Death Guard


The idea is to stack the good force multipliers to have to enable our PM with basic equipment to really shine and get a lot of bodies on the field.

A 10 man squad without anything else does


By itself this isn’t overly impressive, but as you can fit 60 PM into a list, taking down e.g. two Redemptors or 20 Intercessors down per turn just with bolter fire is quite impressive. You also need to keep in mind that PM still retain all their force multipliers for melee and this is in the end where you want them to be.


A 10 man squad with basic knives, buffed by the Biologus/Tallyman/Trench fighter/Arch-contaminator:


with Eternal Hatred for a +1 to wound:

Adding in blight launchers makes this even more impressive and I’d consider taking two and cutting the sigil to keep the cost of a full squad at a reasonable 230 points. Adding in the flail instead of the sigil does increase their melee output significantly. Even accounting for the buffs, the flail against most targets has the same output as including ~3 more PM.


All of this is enabled by spreading our contagions. Getting the AP is fundamental, so we do need to include fast units to use Flash contagion on: FBD, Greater blight drones or Hellblades come to mind. You probably don’t need more than one, as by turn 3 you’ll be in range with your PM to spread from them.

The Aggression of Nurgle:

Possessed are in an interesting spot as a list centred on them can make for a durable and aggressive board control list with a simple game plan - rush and fully threat saturate. Turn 2 is where this army wants to start being in combat.

Biologus is the most efficient buff and I’m quite tempted to include a second one. Fleshmowers fit the theme and play style perfectly to provide even more aggression.


As the PS is so crucial to the survival of two wound models, Ferrymen are a natural pick here to increase his range to 12” and make covering all units easy. PM in a rhino to provide the obsec, and in this msu variant be able to still take on pretty much any msu infantry units.


This is a list that does work well with soup and I’ll explore those options at another time. Possessed don't really need Nurgle’s gift and the game plan is a lot more early game focused, so Despoiled ground isn’t the most natural pick.


Mono does allow you to use +1 to wound very regularly though, which is a great increase in their output and together with AC and BP turn them into blenders against pretty much any target. It also means that I don’t have to take any superfluous units just to fill slots.