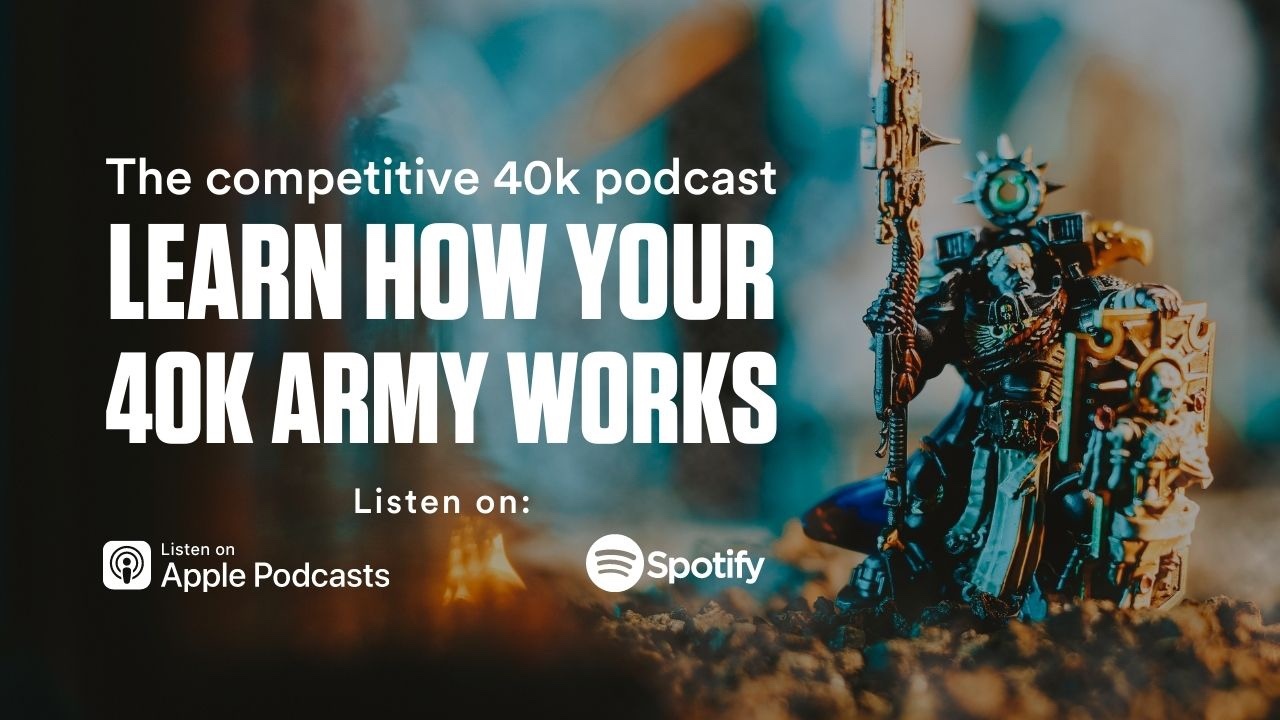 In this episode I interview newly appointed VT coach Logan Heath about how he has developed his Salamander Space Marine Army over the past 12 months.

Through trial and error, experience, adjustments and constant refinement Logan has developed a well thought out and balanced Salamanders army that is not only competitive but also very thematic.

We cover how to develop a list that will work for your playstyle whilst covering some of the hottest Salamander combinations.

If you want to learn more about going through the same process and developing your army then this episode will be perfect for you.

I think my journey to becoming a coach really started when I shifted my understanding of what a coach can be. While I don’t have the accolades and tournament experience of a lot of people, I do love talking about this game and exploring ideas with people. I don’t assume to know everything, but I enjoy learning and sharing what I’ve learned.

I’ve been playing 40K since 2001 or 2002. I’ve seen a ton of different metas, all the OP nasty combos, and all the different kinds of people who play the game. I didn’t start wanting to really make an effort at competing until the end of 2018.

I had a lot of fun in 2019. I did well at some events and started listening to Vanguard Tactics. I really enjoyed hearing Stephen’s approach to the game, and I wanted to try to embody the sportsmanship virtues he preaches.

After spending time with the people in the Vanguard Tactics community, I really like the camaraderie and willingness to learn which is very common among everyone I’ve met.

For me, coaching is being willing to take the time to talk to someone about an idea and help them make the most of it. I enjoy talking 40K, and it’s fun to represent a team that stands for values that I do my best to live by anyway.

I’ve been able to play a good amount of games, but not as many as I would have liked. Tabletop Simulator has been amazing in these times, and I’ve really become comfortable playing with my Salamanders.

How has the academy helped you?

There are so many nuances to every phase of the game, and Stephen does an excellent job of addressing every important moment in the game. There are so many variables to consider, but the Academy walks you through which ones to be aware of so that you can make the best decisions possible while not being caught unawares by your opponent.

And the weekly lessons and conversations have been great to keep up with all the new rules and ideas going around. It can be really difficult to stay informed with everything, but the Facebook group and Discord server have been a great resource.

Let’s talk Salamanders. What inspired you to pick up the army?

I was on Iron Hands in 8th edition, and with the new marine codex coming at the start of 9th, I saw that Salamanders were in a very good position. A lot of people were singing their praises, and personal experience kept validating what I was hearing.

Some of the praise has died down a little with all the new releases, but I believe Salamanders still have plenty of life in their book.

9th Drop! Let’s fast forward a little bit now and look at your approach to the new edition.

My approach has been a long evolution. I like to constantly try new ideas or the same ideas from different angles.

I’ve worked from the idea of having objective secured everywhere to having all the command points to having slow armies, fast armies, shooting armies, melee armies, and all kinds of mixes I could think of. Fortunately, marines can almost do everything, so I was able to really learn their limits in the new rules landscape.

When it comes to how to play 9th edition 40K, I settled on sticking to my guns. As in, I bring all the guns I can muster.

This edition is so lethal and every list I battle has some crazy combo that can kill anything I line up against them. So I settled on limiting their options as much as possible by focusing on killing my targets at range.

A different kind of approach…

I started the edition wanting to have obsec on all my units. I was taking the Rites of War aura and four units of troops at the beginning. As I kept track of my games and seeing what was and wasn’t relevant, I started seeing patterns.

First, I don’t need obsec if my opponent doesn’t have a unit to contest the objective. So many of my games are effectively over by turn 3. And in all my games that do go 5 turns, having obsec has never been crucial to victory.

Second, I don’t need large units for the buffs. Typically you want a decent size unit to get the most out of your buffs. In my experience, it was usually overkill. I’ve found that having small, efficient units get the job done.

Third, I need a variety of units. Attacking the opponent with a skewed approach or just one angle of attack can work, but it’s not a good feeling when the opponent’s list, the terrain, and/or the mission is working against that kind of one-dimensional approach. Having a variety of units means having more options during a game which is immensely valuable.

For Salamanders, it’s all about that +1 to wound for flamer and melta weapons. In this game you either want a volume of shots or high damage weapons, and not a lot fits the bill better than flamers and meltas. That means I get a lot out of Aggressors and Eradicators.

I also need speed. The ability to move about the board is so important when the game has shortened to five turns. It’s a terrible feeling to be out of position and realizing you can’t get your units to where they need to be. That’s where Attack Bikes and Inceptors come in. Attack Bikes have the raw speed, and Inceptors have the free deepstrike capability and then can move a decent range with the fly keyword.

Next, I need the ability to affect the board on turn 1 if I happen to go first. I can’t choose to go second anymore, so it’s just that much more important to have a plan for the first turn. Flamers and meltas are great, but I’m very unlikely to have a good target on turn 1, and my Inceptors won’t even be on the board most of the time. So ideally I’d have a unit that has good range, and it would be great if they also had potential in melee so that I don’t rely solely on my Aggressors. And would you look at that, Space Marines have just the unit (out of the 131 datasheets available to me). The Redemptor Dreadnought is a great fit for the army.

And aside from the automatic Chief Apothecary, I have grown very fond of the Primaris Lieutenant, and Vulkan He’stan for buffing this army.

What’s this? No Troops? Well, I have a lot of reasons for trimming them.

Oaths of Moment is a busted secondary, but when it isn’t good, then While We Stand We Fight is a great option for Salamanders as well.

Assuming the mission being played doesn’t have a great secondary served up to me, then I just need to come up with two more objectives.

Raise the Banners High or Deploy Scramblers are typically a solid choice. And then I usually pick either Domination/Engage on All Fronts or I go for Assassinate/Titan Hunter/Bring it Down if it makes sense.