How To Play Tau in Warhammer 40k 9th Edition 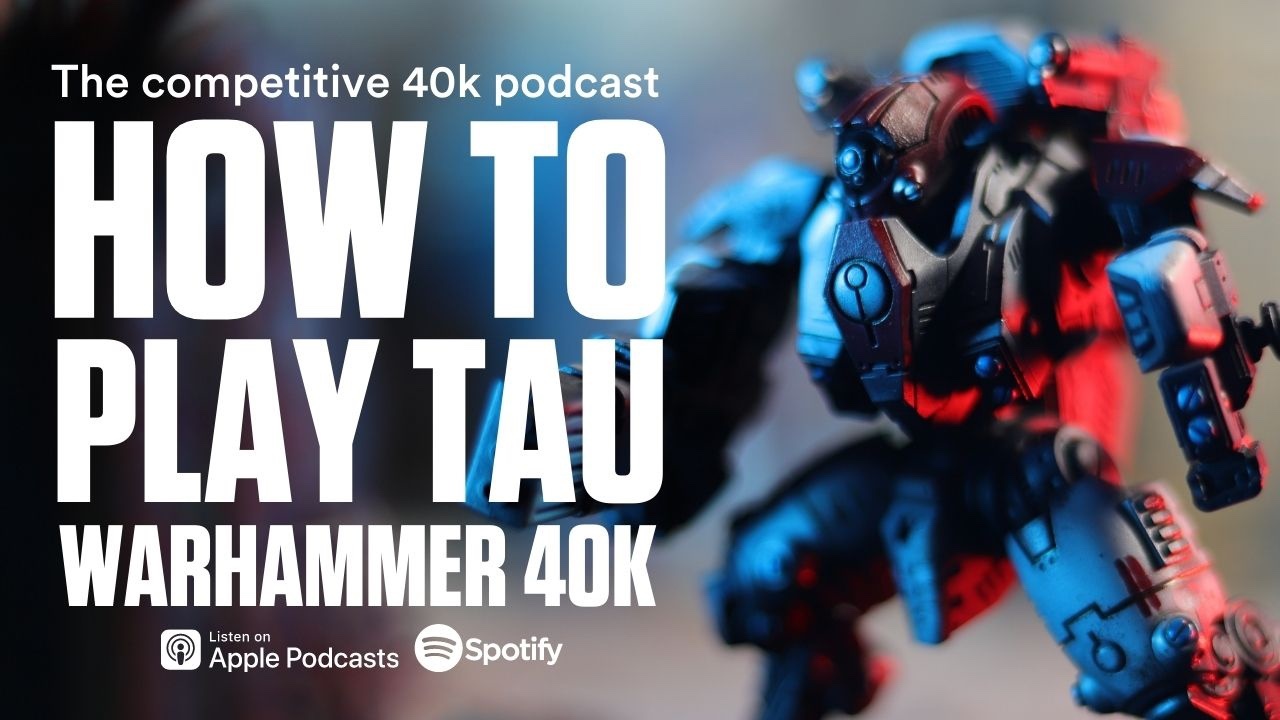 Wondering what you can do to beat Space Marines?

Getting frustrated that you arn't getting the results that you want to?

On this week's show of the Competitive 40K Podcast we cover how Jack has mastered and evolved his Tau army list and gameplay.

Jack takes us through the playstyle of Tau, what makes them unique and then through the problems and challenges that he overcame.

This is an exceptional podcast and something every single Warhammer 40K player will be able to relate to.

We really hope you enjoy this episode.

Hi, it’s Jack here from Vanguard Tactics and I wanted to share my thoughts on my favourite faction the Ta’u Empire.

I have been playing Ta’u competitively throughout 8th Edition and into 9th, so this article covers my journey with the army and how I’m transitioning across to the new edition.

I thought it was time to write this article as now I have played many games of 9th edition and I can now start to see what a Ta’u 9 Edition army/playstyle may look like. I would also like to share my thoughts on the key things I would like to see in a new codex.

Wondering what you can do to beat Space Marines?

Getting frustrated that you arn't getting the results that you want to?

On this week's show of the Competitive 40K Podcast we cover how Jack has mastered and evolved his Tau army list and gameplay.

Jack takes us through the playstyle of Tau, what makes them unique and then through the problems and challenges that he overcame.

This is an exceptional podcast and something every single Warhammer 40K player will be able to relate to.

We really hope you enjoy this episode.

In my opinion the Ta’u are a co-ordinated force that make use of great defense and concentrated firepower married with a reasonable amount of mobility.

They are masters of taking a hit from an opponent then using their combined faction abilities to deal with threats and secure areas of the board.

After many practise games and tournaments the majority of my Ta’u armies were reliant on the following key points to win a game of Warhammer 40k;

In 8th Edition it felt like the Ta’u codex and psychic awakening books were well rounded in terms of overall balance with other factions and that they could always compete at the highest level.

That being said there was one main archetype of army build which centred around Ta’u sept, 3 Riptides, Commanders and Shield Drone spam. With the playstyle based around shooting your opponent in the early battle rounds with drones absorbing all damage and then jumping on the objectives in the later battle rounds.

I can appreciate that in certain match-ups the combination of shield drones, falling back and shooting with the impressive overwatch could be oppressive to an opponent and could create frustrating games for certain opponents.

Therefore I could see the need for change not only to help balance certain match-ups but to also provide further options to the Ta’u player in the army build and playstyle.

9th edition provided a number of rules and mission updates to freshen the game, i will focus on the key changes that affected Ta’u and their playstyle;

As you can see from the key advantages and disadvantages from 8th edition these have been flipped on their head, e.g your strength is now your weakness and vise versa.

So, will my 8th edition army work in 9th edition? No, it’s time to change.

After my first few games of 9th edition with my 8 edition style list i soon learnt that my list needed to change. I need more mobility and units to help compete on the primary objectives as well as having units to help securing secondaries.

When developing my new list I went back to basics and studied my codex and units in detail to see what units/strategies could have more relevance for 9th edition. From this research it really helped in building a new style of list.

T’au troop choices in profile aren't very survivable and slow, so how can we work around this? The Devilfish, this provides mobility and survivability to your key objective secured infantry. Thanks to the recent FAQ the devilfish is now cheaper. I currently write all of my lists with 4 x 5 man breacher units and 2 x Devilfish as a core.

Board control and applying pressure are key elements of the 9th edition missions. T’au have great access to screening units such as two man drone units to fly across the board to help with secondaries such as engage on all fronts but also provide a screen from deepstrikers.

Applying pressure can be in the form of Ghostkeels and stealth suits, these units can be employed to give your opponent a deployment headache and to act as a ‘speed bump’ that your opponent has to deal with first before heading towards your gun line.

Employ tactics like charging ghostkeels and devlifish into units that you know can’t kill them in one swing. This removes options from enemy general. Typically that unit cannot then shoot, charge or perform actions. You can make use of small drone squads to get into places where your enemy has to deal with them and try to force ‘bad trades’ for them.

Balancing defensive, board control, gun line and markerlights is tricky and will vary depending on your play style and sept choices. I critically review my games and evaluate the units in my list to check they are performing the role that was intended for them.

Personally I’m currently having the most fun than I have ever had playing T’au and I feel like they have the options to start to compete in 9th edition.

Thoughts on the New Codex - remove from show notes??????

It’s important to remember that we are currently playing 9th Edition with an 8th Edition codex. I have the uttermost faith that all sept traits, warlord traits, relics, stratagems, secondaries etc will be brought in line in terms of effectiveness with what we are seeing in the most recent releases.

I do want to focus on some key mechanics that I would like to see in the new codex as i feel these are the abilities that Ta’u require to be able to compete at the top levels at tournaments. I’m not suggesting these rules are army wide and will require moderation via restrictions such as stratagems or targetted buffs.

Being caught in combat with Ta’u currently can lead to an instant loss, having access to fall back and shoot will provide great tactical flexibility for the Ta’u. Engage and Re-engage feels like a style suited to the Ta’u. Now Monk’ta has been FAQ’d to allow a once per game fall back and shoot this is a massive boost to the army and step in the right direction.

To make certain units special such as crisis suits, maybe BS3 on stat line or in built fall back and shoot. Pathfinders will shoot and move could be some great editions.

To work in a similar way to space marine doctrines and necron directives, this could be a great opportunity for overall game strategy.

Boxes required to build this army

Head over to Entoyments website today to start your T’au Army!